Development of the Paediatric Foot

29 Mar Development of the Paediatric Foot

Things have been hectic lately.  After welcoming into the world our baby, Thomas, it got me thinking about the paediatric foot and the stages of development for children and their feet.

I’m often asked about the changes that occur in children throughout their life cycle, and what shapes are considered “normal”.  Parents are understandably concerned as to the welfare and development of their children, so I will attempt to answer some general questions about the nature of foot and lower limb development for kids from years 0 to 10.

All information about development of the paediatric foot and lower limb should be taken as general in nature, and any specific concerns can be addressed with a consultation.

Children born without genetic or congenital abnormalities tend to follow a pattern as far as leg and foot development goes, and it is very similar for girls and boys.

From ages 0 – 18 months (approximately) children’s legs are in a varus position.  That is, they look bow-legged.  And their feet are very flat due to the extra flesh and fatty deposits in their feet.  So when children take their first steps, they take short little steps with their hands held out to the side to balance themselves and will look flat-footed and bow-legged.

From approximately 18 months to around 3 and a 1/2 or 4, children will have their legs move into a valgus position.  That is, they look knock-kneed.  This becomes more pronounced for girls as they get older due to the shape of the pelvis and the angle of the thigh bone relative to the knee.  So kids when they walk at this age often look very knock kneed.  But they should NEVER be pigeon toed.  Pigeon-toeing is not a normal part of development, and can be easily treated in most cases if assessed and managed early.  But knock knees is normal to around 4 years of age.

Then from 4 till about 7 or 8 (but sometimes as late as 10) the feet begin to form an arch as the small muscles develop further and the ligaments and bones become solid.  Flat feet after about the age of 10 can then be treated if necessary, depending on whether they are causing problems with running or walking.  But flat feet are a normal part of development till approximately 7 years of age when the muscles, bones and ligaments are able to hold the arch in the foot.

So that is the basic progression of children’s feet during the growth cycle.  The next blog will explore abnormal foot and leg positions and what to look for as a parent. 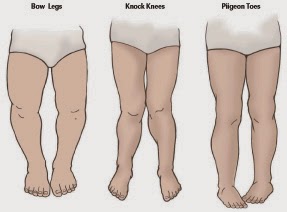